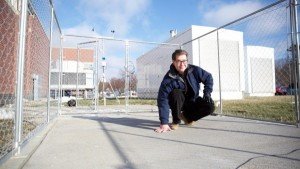 A professor at the University of Nebraska at Lincoln has created a concrete that could make snow shoveling a thing of the past. Since 1997, Dr. Chris Tuan has been developing a special mix of concrete that, when powered,  can safely melt ice.

The mixture is about 80% concrete and 20% steel fibers and carbon particles. A 200 square foot slab of concrete only needs as little power as what is produced by a wall outlet and the electricity is safe to touch. The mixture is being tested by the FAA and could potentially be used for the tarmac at a major airport.

How is it used?

You can see a time lapse video of the concrete being tested here. As you’ll see, the snow piles up outside of the test concrete but the concrete itself remains clear. Although it’s not likely that this cement could be applied to highways, it could be useful in intersections and exit ramps.

Dr. Tuan hopes that one day this technology will be available to the public. He says that one day, this new type of cement could eliminate personal injuries from slipping and falling on a slippery sidewalk. In addition, it could mean that your shoveling days are over.

Read the full story from the University of Nebraska-Lincoln here.

The bridge over the Christina River in Wilmington is having some work done to it. In order for the contractor to be able to apply new concrete coatings to the Read more

We were excited to be in Lynchburg, VA working at Sellers Verna R MD-Centra Health. Recently, we were called in mid-project to prepare this health facility for new flooring. Our Read more

Blast and Seal in Fredericksburg, VA

We traveled to Fredericksburg, VA to take on a project for a customer. We performed a shot blast and seal on a 220,000 sq ft surface. Check out the photos Read more

We had the opportunity to help one of our clients, Collegium Charter School in Exton, PA, with their new gymnasium floor. We removed the tile from the 6,400 sq ft surface Read more