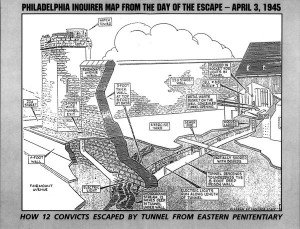 Halloween seems an appropriate time to share one of the more eerie concrete stories we know. This one takes place in one of the creepiest locations in the Pennsylvania area, the old Eastern State Penitentiary.

Though it’s been closed for years, the Penitentiary is a popular haunt around Halloween thanks to its spooky reputation and terrifying holiday attractions. However in 1945, the scariest thing about the prison was the inmates jailed inside. Some of those inmates have become infamous for not only the crimes they committed, but for doing the unthinkable — escaping from a concrete cell.

Clarence Klinedinst was an inmate who was also a skilled stone mason and plasterer. He was a favorite of the guards and due to overcrowding, was allowed to repair Cellblock 7 in order to stay in it. Using his tools, he created a false panel in the wall of his cell (68) and began one of the most daring prison escapes. Klinedinst and his roommate began digging a tunnel after lights out, keeping a plaster mask in their beds to fool guards. Using spoons and tin cans, they dug a 31-inch opening in the concrete wall.

Over the course of a year and a half, they dug 15 feet down, 97 feet out from under the prison, and another 15 feet up to free land above. The tunnel was sophisticated too, Klinedinst shored it with wood bracing and even equipped it with lights and ventilation fans. He was even able to filter the excess dirt through a tube into the sewage system so no one could detect their work.

On the morning of April 3, 1945, Klinedinst, his roommate, and ten other inmates including Willie Sutton snuck into the cell on their way to breakfast and made their way through the tunnel, the largest section of which was just 3 by 3 feet. The twelve men successfully made it to the other side of the prison walls, but many were captured within minutes. 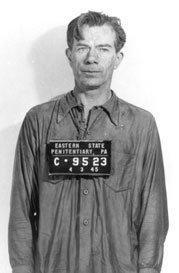 Willie Sutton was a bank robber known for being charming, cunning, and sly. He was the first escapee recaptured after the stint, and made it just two blocks from the penitentiary. Years later, he took credit for being the mastermind behind the plot. While his role in the plan is debatable, it certainly helped him reach infamy.

Klinedinst was a free man for three hours, and his roommate was shot and captured at the home of a former girlfriend. Another escapee actually returned to the penitentiary on April 11, asking to be let back in because he was hungry. Eventually, all of the escapees were recaptured and guards filled most of the tunnel in with ash.

In 2005, on the 60th anniversary of the escape, the tunnel was reopened after an archaeological study. The tunnel, as well as Cellblock 7, were made available to the public.

As much as we work with concrete ourselves, we can’t help but be amazed by the ingenuity of this group. You can read more about the escape from Smithsonian.com.

The bridge over the Christina River in Wilmington is having some work done to it. In order for the contractor to be able to apply new concrete coatings to the Read more

We were excited to be in Lynchburg, VA working at Sellers Verna R MD-Centra Health. Recently, we were called in mid-project to prepare this health facility for new flooring. Our Read more

Blast and Seal in Fredericksburg, VA

We traveled to Fredericksburg, VA to take on a project for a customer. We performed a shot blast and seal on a 220,000 sq ft surface. Check out the photos Read more

We had the opportunity to help one of our clients, Collegium Charter School in Exton, PA, with their new gymnasium floor. We removed the tile from the 6,400 sq ft surface Read more